Create an Account - Increase your productivity, customize your experience, and engage in information you care about.

James R. Elensky, a 27-year law enforcement veteran, holds a Bachelor of Science in Professional Aeronautics from Embry-Riddle Aeronautical University, and a Master’s in management from Warner University.

During his tenure at the Sheriff’s Office, Elensky worked up the ranks from Sergeant to Lieutenant and was named Captain over the Bureau of Criminal Investigations, which included homicide, sex crimes, forensics, and crime-scene investigation. Surrounded by a great team, Elensky obtained a 100-percent homicide clearance rate just 16 months after taking command.

Elensky retired from the Sheriff’s Office in 2013, but he made his return to law enforcement in March when he was hired by the Haines City Police Department as Deputy Chief. 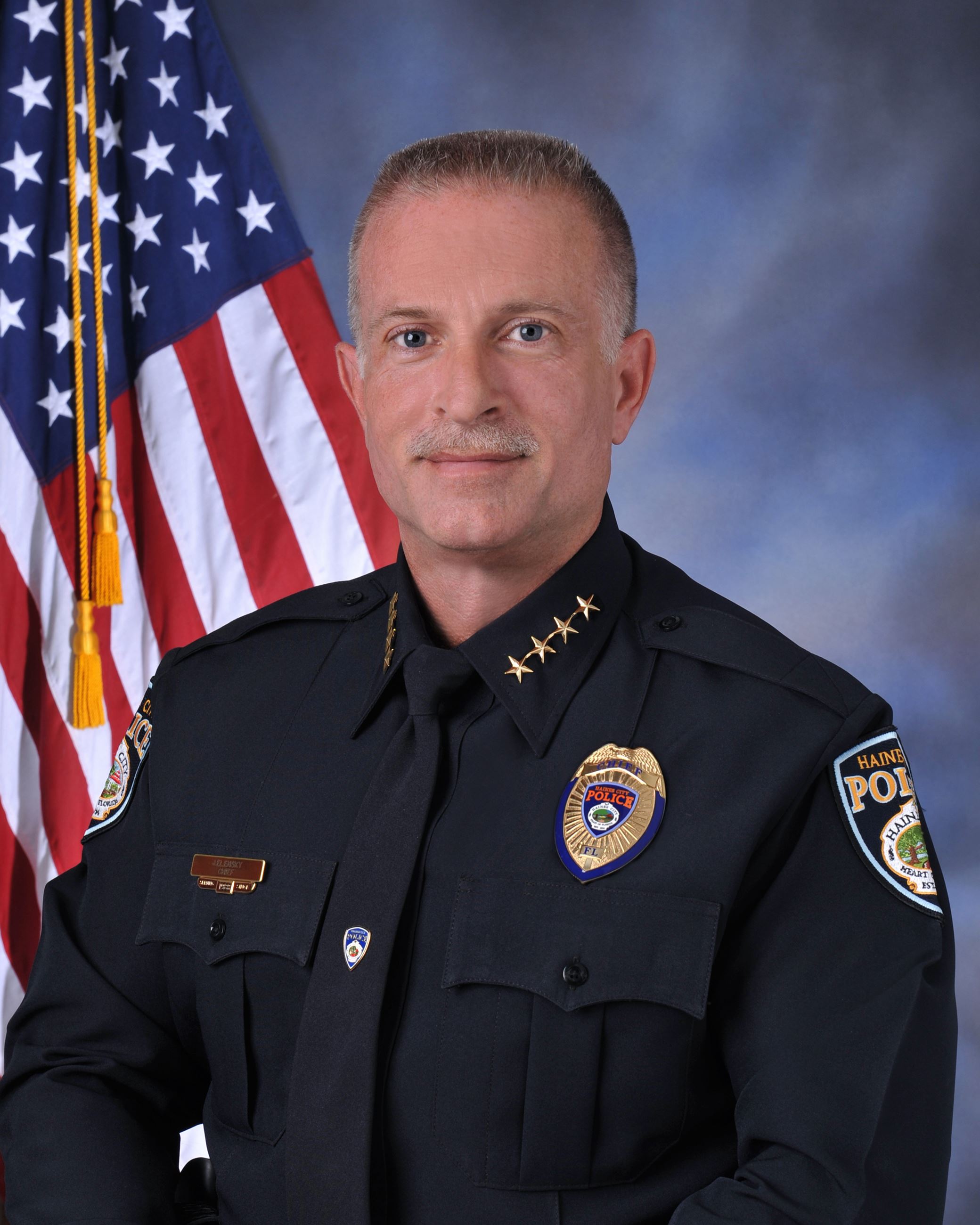 Captain Garcia has been with the Haines City Police Department for over ten years. He has worked in the Criminal Investigation Division as a Detective and Detective Sergeant; has served the Patrol Division as Corporal, Sergeant, and Lieutenant. As Captain, he will oversee all operations at the Haines City Police Department to include the Patrol Division, Criminal Investigation Division, Code Compliance, and Records. He holds a Bachelor’s Degree from Polk State College and is a graduate of the Tri-City Leadership Academy, Florida Executive Development Seminar, and FBI-LEEDA Supervisor, Command, and Executive Leadership Institute. 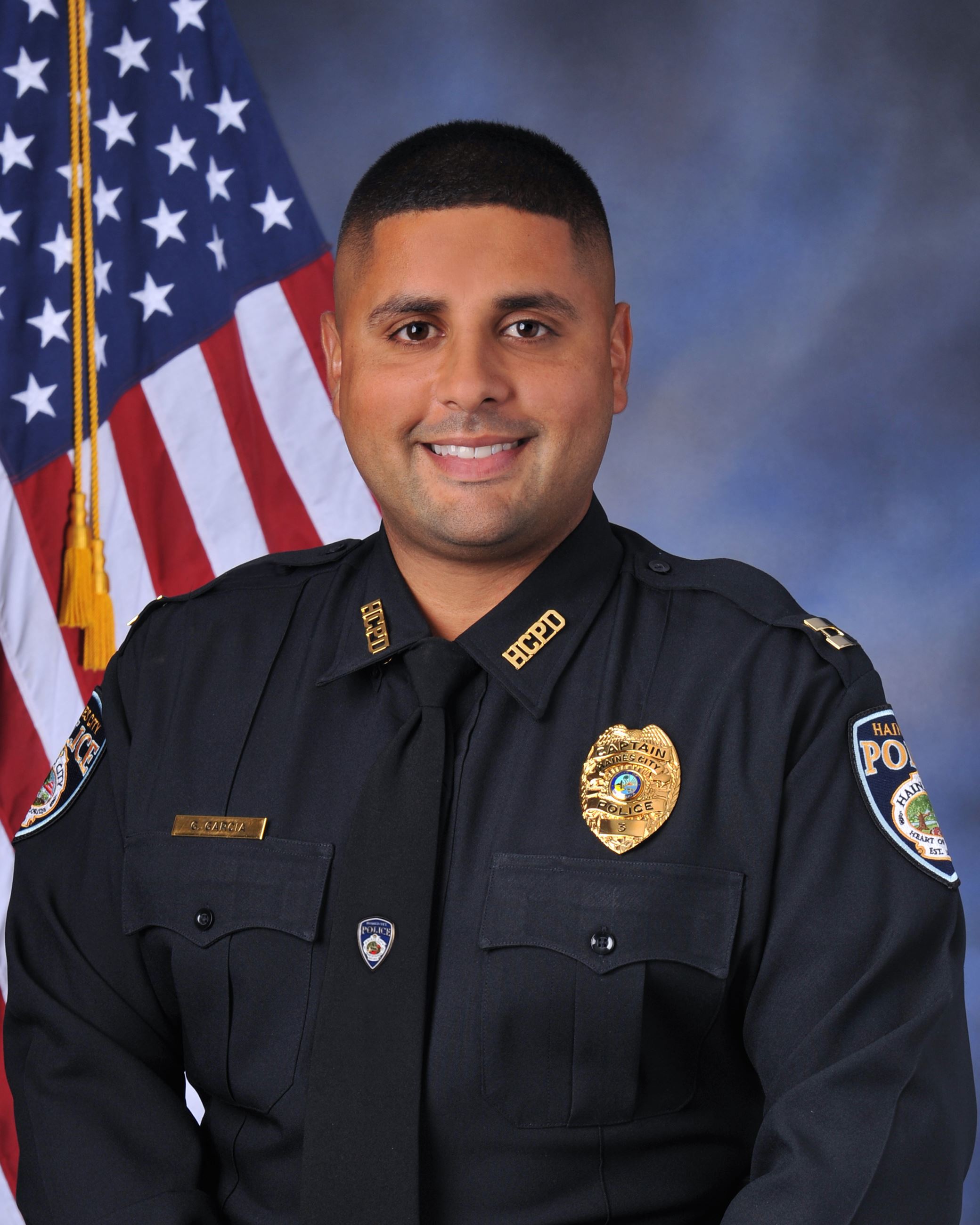 The Haines City Police Department Criminal Investigations Division is assigned to investigate all types of crimes, such as homicides, fraud, burglaries, thefts, aggravated battery, DCF cases, and sex crimes. The members of CID are required to attend mandated specialized training classes to ensure on-­going professional development. The Criminal Investigations Division is under the supervision of the Detective Sergeant and there are currently seven detectives assigned to the unit.

The Crime Scene Unit employs two full-time Crime Scene Analysts, who ensure that crime scenes are investigated and processed properly by following the industry's standard practices and protocols. The CSI's go through specialized training in the handling, storage, collection, documentation, and identification of crime scene evidence.

The Haines City Police Department currently employs one full-time Property Evidence Technician, who is responsible for the receipt, recording, storage, retrieval and destruction of all property and evidence that is collected by the Police Department. The Property Evidence Technician must also obtain specialized required and mandated training to ensure compliance with Federal and State laws.

Lieutenant Hopwood, during his 33 years in Law Enforcement, has served as patrol officer, undercover drug investigator, and detective. He was promoted to Detective Sergeant, and for the past eleven years has been a Lieutenant overseeing the CID or Patrol Division.  Lieutenant Hopwood was appointed the Acting Police Chief for the agency in 2016/2017 before transferring back to Lieutenant. 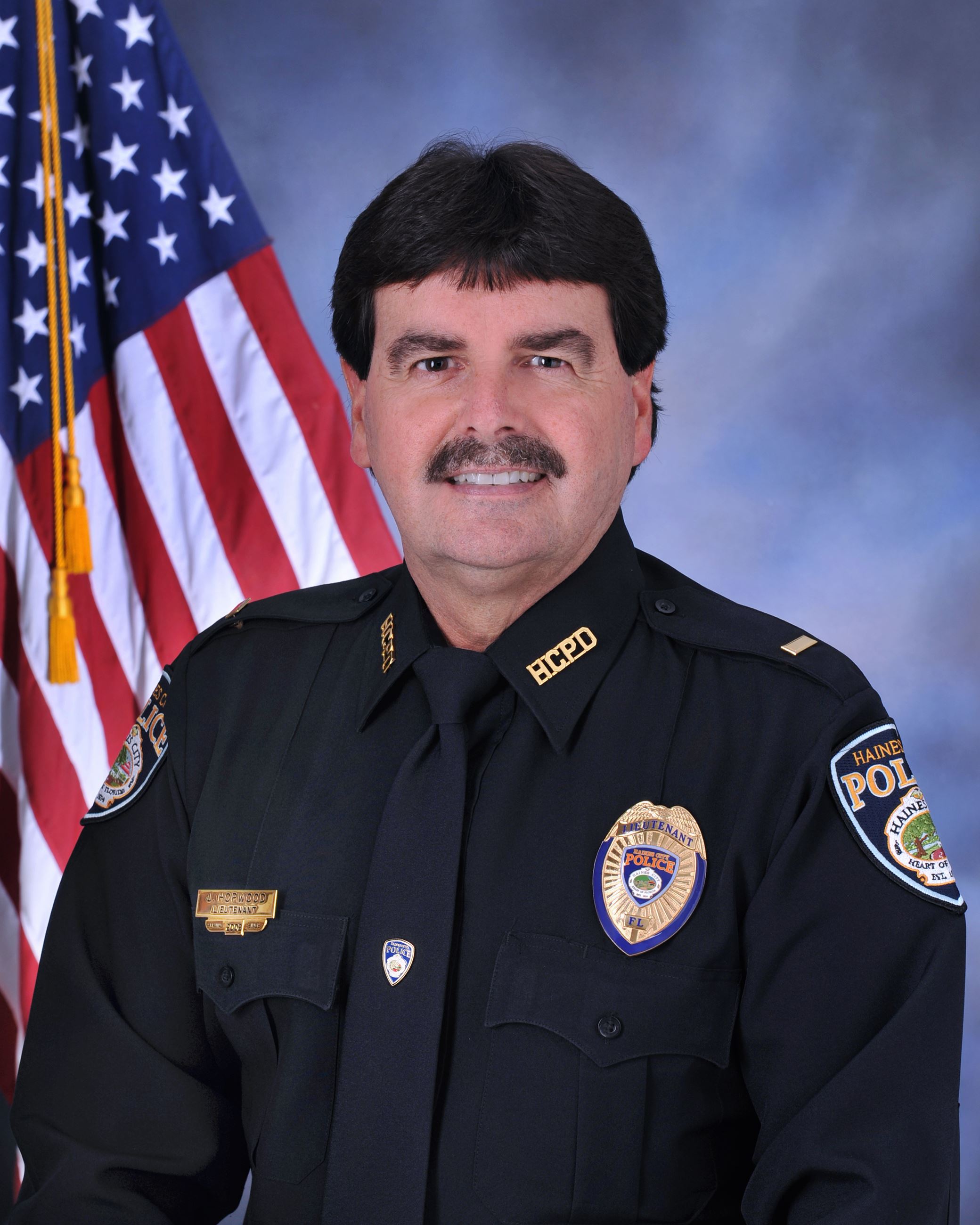 Lieutenant Jackson has been with the Haines City Police Department for over 10 years. He worked with the Community Oriented Policing (COPS) Unit as an Officer, Corporal and Sergeant. He served the Patrol Division as a Corporal, Sergeant and now Lieutenant. Lieutenant Jackson also serve the Haines City Police Department as the lead trainer and Training Coordinator. He holds a Bachelor’s Degree from the historical Bethune-Cookman University, and a Master’s Degree from St. Leo University. He also is a graduate of the Tri-City Leadership Academy, and the Florida State University’s Certified Public Management (CPM) academy. 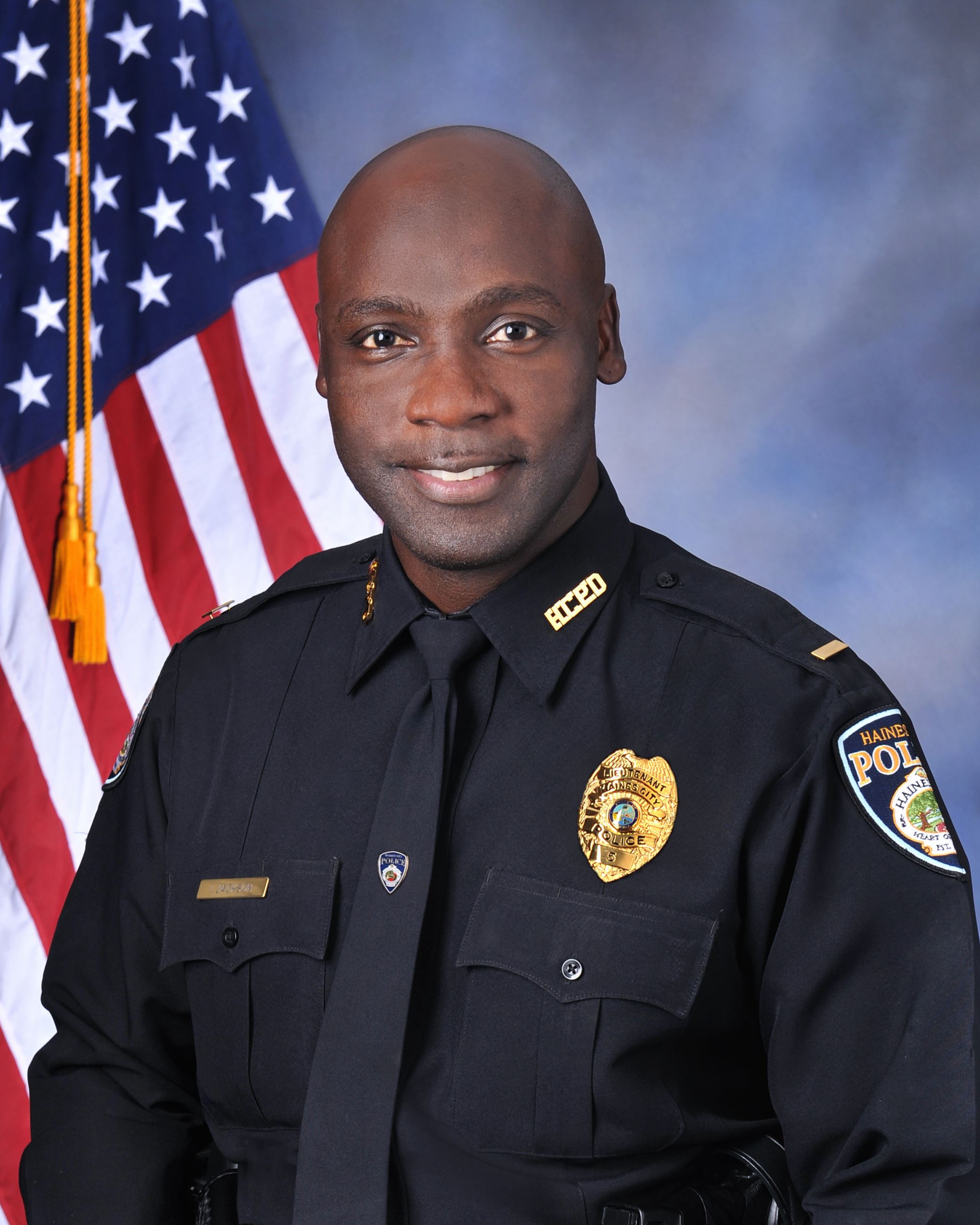 Tyrone Wilson is the Accreditation Manager and oversees department compliance with CALEA Standards.

Tyrone is a 24-year military veteran, holds an Associate’s Degree from Excelsior College and a Bachelor’s Degree in Information Technology from Kaplan University. He began his military career as a Marine of 12 years, then completing 12 more years of service in the Active Guard Reserve (U.S. Army).

In the Marine Corps, Tyrone ascended from the rank of Private (E1) to Sergeant (E5), holding various jobs such as a Heavy Equipment Operator and Federal Journeyman Electrician.  He held additional duty assignments as Platoon Sergeant and Floor Chief of an Engineering Maintenance Shop. During his tenure in the U.S. Army, he served in the rank of Sergeant (E5) to Master Sergeant (E8), holding the job of Military Intelligence Analyst, with additional duties as Army Recruiter; Acting Company First Sergeant, and Senior Intelligence Non-Commissioned Officer of units that contained various Intelligence specialized personnel, and as an Operations Sergeant for an Entire Company.

While in the Army, Tyrone received training in the fields Information Technology, Security and Accreditation, and Supervisory, Leadership, and Management, which would later prove valuable in his role as Accreditation Manager.

Overview of the International Commission on Accreditation for Law Enforcement Agencies (CALEA), this is the Credentialing Authority with whom we are currently accredited through.

The Commission on Accreditation for Law Enforcement Agencies was created in 1979 as a Credentialing authority through the joint efforts of law enforcement’s major executive associations:

The purpose of the CALEA Accreditation Program is to improve the delivery of public safety services to each agency local residence and to the General Public, primarily by: maintaining a body of standards, developed by public safety practitioners, covering a wide range of up to date public safety initiatives; establishing and administering an accreditation process; and recognizing agencies professionalism and performance of excellence in adhering to these international standards.

The Haines City Police Department reviews a total of 459 CALEA International Professional Standards in order to remain in compliance with the CALEA Accreditation Program.

Some of the Specialty Goals of CALEA are to: 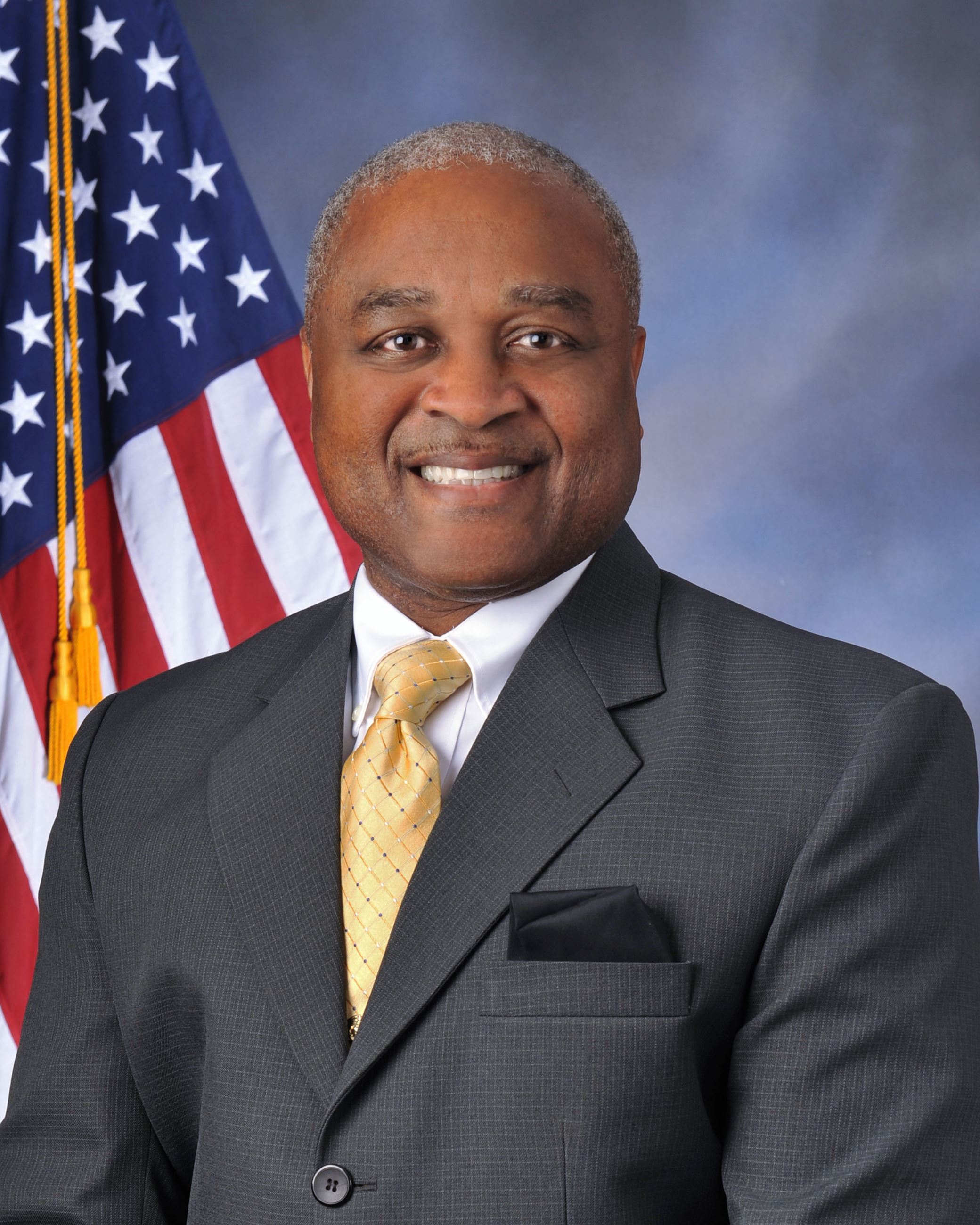 Was this page helpful for you? Yes No